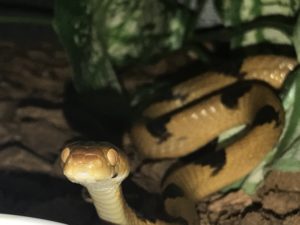 Eastern Tiger Snakes are easily identifiable by their colouration which varies from a bright orange to a salmon yellow base colour with between 20-50 black bands or blotches traversing the body. These dark bands or blotches start directly behind the head and extend down to the tail. They have a visually distinct head with large bulbous eyes that are orange in colour with vertical pupils. The body is slender with smooth scales and the tail thin with paired sub caudal scales. The tongue is a pinky orange colour, which lightens towards the tips.

The average adult length varies from 40cm to 80cm, exceptionally individual specimens may grow larger. They display a degree of sexual dimorphism with females being much larger than males and the males having noticeably longer tails. Hatchling sizes range between 15cm and 23cm

As a result of their wide geographical range, Eastern Tiger Snakes can be found in a variety of different habitats. They are often found under loose bark or in cracks between rocks and frequently will climb into roofs of dwellings.

Eastern Tiger Snakes are rear-fanged (Opisthoglyphous), however the venom they carry is of no consequence to humans although some localized swelling and itching may occur in some individuals after a bite. The ‘fangs” are essentially enlarged teeth and venom is delivered by means of chewing. On larger prey items, venom will be used in conjunction with constriction although this is possibly only to keep the prey item from escaping until such time that the venom has had time to take effect.

Eastern Tiger Snakes are nocturnal hunters that move around their enclosure at night, hunting for prey items such as lizards and rodents. The enclosure should therefore provide an opportunity for them to be able to do this. Sufficient floor space with the option of climbing up to raised structures such as branches or ledges is essential. Although Eastern Tiger Snakes will happily drink from a water bowl it is advised that the cage be misted once a week in summer to help raise the humidity slightly and to provide enrichment to the snakes.

A variety of substrates can be used but it is imperative that whatever substrate is being used does not dry the enclosure out excessively or create dust. Substrates such as gravel, sand and cat litter are not suitable and can cause health issues. We use coco husk, which is absorbent and particularly good at retaining moisture. It is easy to spot clean and available from most pet shops and garden centres.

A wide range of heating devices including light bulbs, heat pads, tubular heaters, ceramic heating elements and basking lights are available to regulate the temperature environment for your snake. With Eastern Tiger snakes it is recommended that heat is provided from above only on one side of the enclosure. This will allow them access to heat for digestion purposes and a cooler area for sleeping or resting. Optimally, a hotspot of 28 – 32 degrees during the summer months is recommended, which should be lowered to 26 – 28 degrees during winter if it is the keeper’s intention to breed their snakes.

In the wild Eastern Tiger Snakes prey predominantly on geckos and lizards, however in captivity a safe supply of feeder lizards is not always available. As a result, most keepers feed rodents to their snakes, which is perfectly acceptable provided that the snakes are not overfed, and they are provided with additional supplementation of vitamins and minerals. Prey items such as baby mice and rats are high in fat content but low in other essential vitamins and minerals. Using a good quality supplement is advised, which can be sprinkled onto the prey item prior to feeding. Hatchling Eastern Tiger Snakes are tiny, and it may be required to feed pinkie parts or gecko tails for the first few feeds until they are large enough to move onto whole prey items.

Eastern Tiger Snakes mate in early spring in South Africa which is September through to November. During the winter period we offer food only every second week, however when temperatures start to warm up in Spring, we increase feeding to once every 5-7 days. It is advisable to feed your snakes smaller prey items during this time. The warmer temperatures, longer days and increased availability of food will trigger mating behaviour. The male is introduced into the female’s enclosure from around the second week of September and left in the enclosure for a period of 3 days and then removed for 10 days. This cycle is continued until the middle of November or until the female is noticeably gravid. Be sure to continue feeding smaller prey items more frequently during this time. Once the eggs are visibly noticeable in the female it is advised to put a laying box into the enclosure, with either damp vermiculite or sphagnum moss in it. This will provide the female with a suitable laying spot and decrease the possibility of her laying her eggs in an undesirable spot, like the water bowl. Just prior to laying, the water bowl should also be removed but please ensure the cage is misted daily to allow the female to drink sufficient water. Once the eggs are laid, we remove them and incubate them in an incubator at 26-28 degrees. They take 55 – 85 days to incubate and the hatchlings measure 15 – 23cm. Be sure to separate the male and female as they will continue to mate and lay eggs which can be detrimental to the health of the female if left together. Females are well known to lay fertile clutches for a few seasons even if no longer with a male.

Once the babies have hatched and shed, they should be separated, and plastic tubs are perfect for this purpose. Paper toweling as a substrate, a water bowl and square plastic mesh with some plastic plants in to create hiding spots is ideal for hatchlings until they are large enough to move into their permanent enclosures.